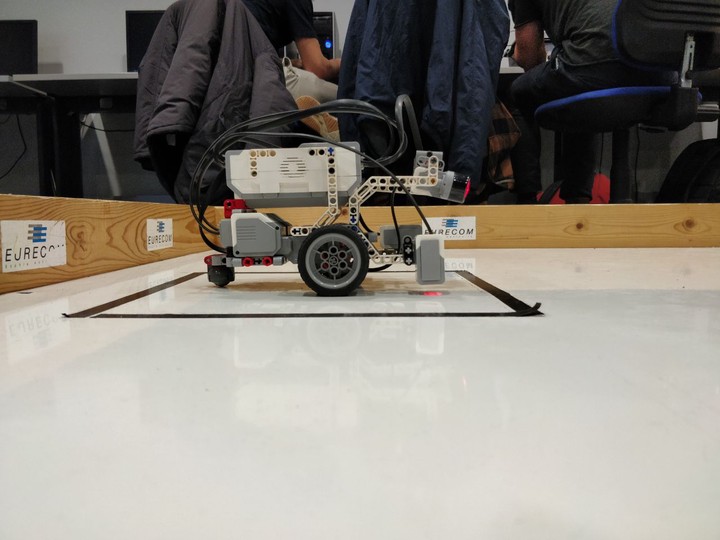 The identify and shoot project consists of building a robot using the EV3 Brick, to play a game where the robot has to detect objects, avoid obstacles and shoot balls to the opponents' side of the field. The programming was done thanks to techniques studied during the OS course.

Our initial decision was to make the most minimalist and compact build possible. Although more complex builds, with sophisticated shapes (arms, moving elevators) are tempting, and might provide useful functionality, they create great mass imbalance and make it very hard for the robot to move with a high precision. So this choice was made to serve the goal of optimal mass distribution, which will eventually save us a lot of troubles. We used two tacho motors to animate the wheels, a sonar on the lower front of the robot, and a color detector mounted on the front and oriented to the floor. A gyroscope was also mounted in the middle of the robot to keep track of the orientation. Although a servo motor was placed to rotate the sonar and measure the eight of the shapes, we didn’t take advantage of this for reasons of instability. 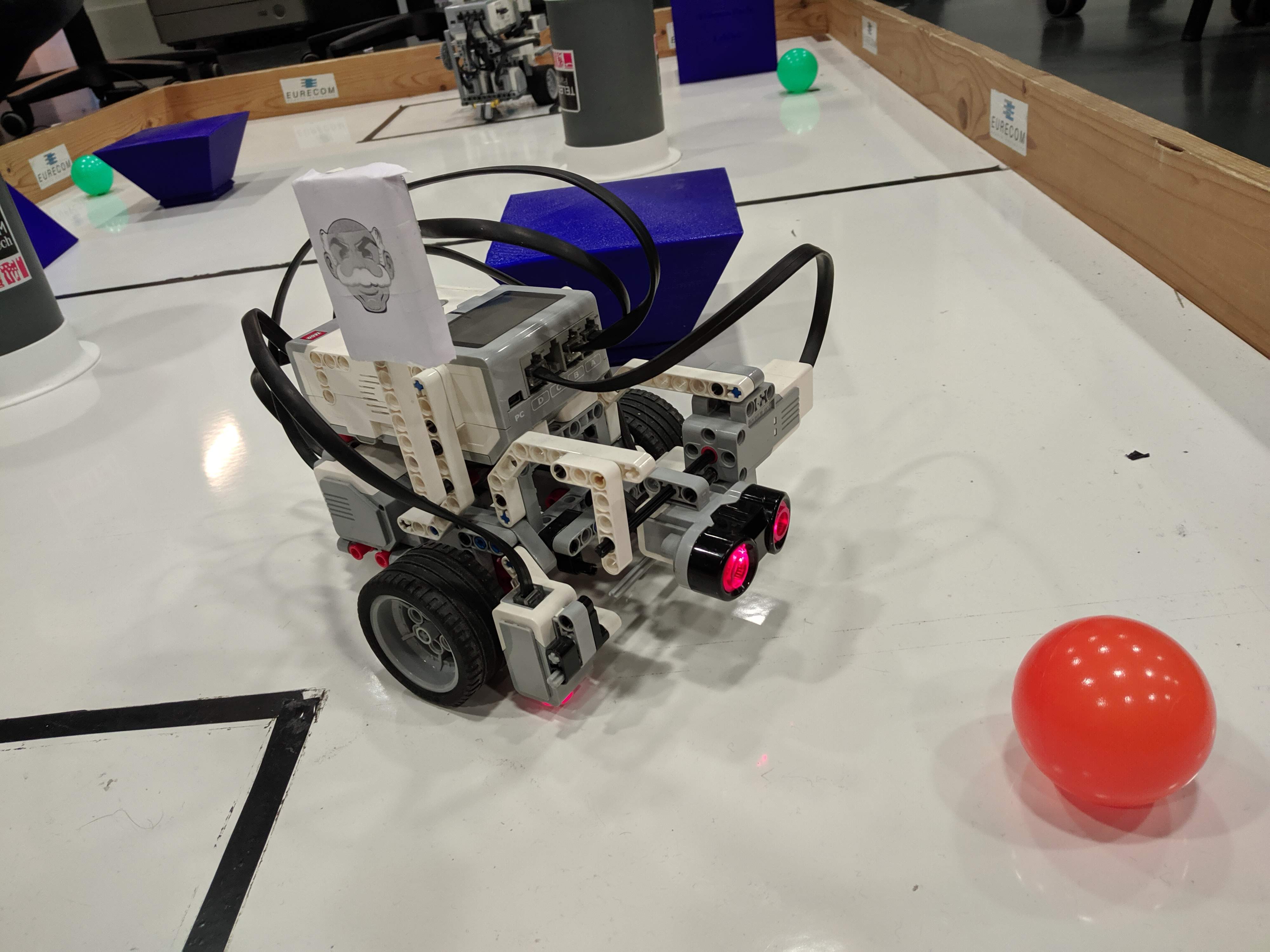 Four main components were used in addition to the EV3 brick:

Tacho motors were the most documented component online, so it was the easiest component to write code for. We used different speeds but all below 100 to avoid any major perturbations for the gyroscope. For the braking mode we used TACHO_BRAKE (stopping without hard break) for same reason.

The sonar is maybe the tightest bottleneck for this robot. Given the error prone and blurry feedback, and the relative complexity of the shapes, we had to make a lot of compromises to make it reach a minimal performance. The shapes didn’t have a persistent signature on the sonar. The reflection of the sonar waves varies depending on the position of the shapes (rotation relative the vertical axe perpendicular to the floor) and on the presence of other sonar sensors on the field. Therefore scanning a cube for example doesn’t have any persistent signature. The cylinder was relatively the easiest shape to recognize and identify due to its symmetry. The plot below shows the common problem with the sonar module we used. It is very inaccurate when reading the corners of the field, and the feedback on a empty field doesn’t really reflect the reality of it. The dotted line shows the real dimensions of the field, while the blue line is the sonar reading. 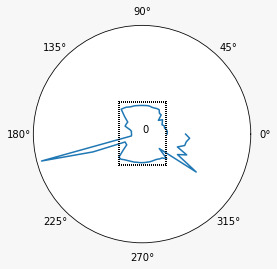 The color sensor was used for initial testing to check for the back line separating the two fields, so that the robot does not cross to the other side.

The gyroscope is used to detect the orientation of the robot in order to move in a specific direction or to detect the position of an object. It is very unstable and requires very slow movement in order to maintain a usable performance. Occasionally, it had to be reset, unplugged and re-plugged. 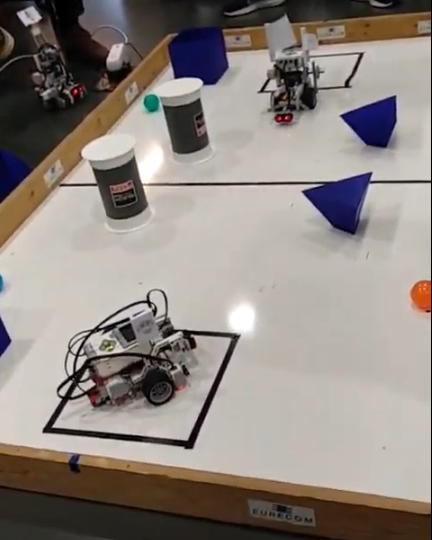 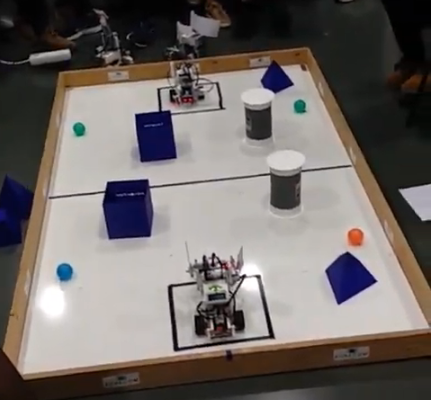 Our code has two main parts that are loaded in each test program: a small library that deals with all the motion related code that can be used in our main program(s), and a sensor data shared memory object, that is regularly updated by the sensor module that is compiled into a separate binary. This runs as a separate process.
The full code can be found on the Gitlab Repository of the project.

In this file, we deal with all the motion related functions, we load the necessary libraries, we define the correct ports, and we initialize the hardware. To simplify the usage, we expose simple functions:

These functions only take the speed parameter and perform the action requested. motion.c is eventually imported into the test files, and used as fit.

Sensors.c is used differently than motion.c. It is actually compiled into a separate binary that runs independently from the rest of the program. Its only task is to read the input of the sensors, and put it on a shared memory thanks to System V shared memory. This memory is accessed later by the separate programs whenever they need input from the sensors. This modular approach made developing much easier because we didn’t have to worry about reading from the input or deal with any of the sensors libraries inside our main program. Sensors had to be launched separately before running any other program that requires sensors input. The structure written in the memory is the following:

When running two separate instances, the older instance exits automatically and let the newer instance take control over the shared memory to avoid any conflict when reading or updating the memory.

The initial thought was to perform a grid scan, where the terrain is split into small regions and then explored traveling from region to another. Once over, an accurate trajectory could be generated to kick the balls while avoiding and identifying the shapes and their position.
Unfortunately this was not feasible using the sensors we have, therefore had to settle for a more basic approach. we imposed two main constraint to accomplish this:

During the initial development phase we mainly focused on the detection of objects and balls. The first test, demonstrating the ability to find an object in our side succeeded. Also, we were able to shoot the balls at the predefined position and shoot it to the opposite side.

Test 1: Be able to find an object in your side

In order to find the object, we first tried to scan the surroundings while spinning counter-clockwise and approach the first occurrence of a sonar value above a certain threshold. Because this made it hard to identify objects further away from the closest wall, it was not feasible for use in-game.
Consequently, we tried a new technique to increase precision. Thus, we tried to establish a baseline instead. A technique which we relied heavily upon later in the game. Using this technique we deemed to stretch the potential of the sonar to its maximum with decent accuracy by comparing our fresh readings to the baseline readings. This baseline was established by performing the same motion with an empty field. We could then compare our readings during the test with the empty field instance. This should result us with the discrepancy of sonar values in certain angles, mapping to the location of the ball or potential objects.

Once we detect such an object, we approach the one with the largest discrepancy from the baseline.

Test 4: Be able to find a ball located at a predefined position

In order to find the ball, we first tried to scan the its surroundings while spinning counter-clockwise and approach the first occurrence of an increasing sonar value. Taking a small margin of inaccuracy and fluctuation into account.
This should theoretically work, because the wall approaches the robot, from its perspective. The ball would give even lower sonar values. On the contrary, when the sonar is reading its distance past the left side of the ball, it should read higher values, because the wall is further away from the ball. When that would be the case we can approach the ball.
However, our sonar sensor turned out to be insufficiently accurate in practice. It could not differentiate the small shape of the ball from the approaching wall.

Test 5: Be able to shoot a ball in the opposite side

This test is relatively simpler, because we can place the ball wherever we want. Our approach to this is to specify an angle and a distance, and then simply make the robot run in the ball direction and kick it.

First we start spinning, and check the gyro values till we reach the corresponding angle of the position of the ball. Then the robot accelerates and runs forward to the ball and kick it. When first implementing this test5, we didn’t use the sonar because it was at a relatively high point, and wouldn’t detect the presence of the small ball.

In order to minimize the movement, we had to perform the recognition task before moving from our initial position. This had two main advantages:

Once performing a scan, it is compared to a baseline established before the actual game where we scanned the empty arena, this was done using the following procedure:

When comparing the scan during the game and the pre-established baseline, we added a tolerance coefficient to take into account the poor precision of the sonar and maybe any small variances between the two scans.
Unfortunate, our performance suffered a lot from false reads, where the sonar detects the waves sent from the robot on the other end, and eventually identifies them as objects.
Once comparing the two scans, the program generate a bitmap of 0s and 1s, where the 1s indicate the presence of an object. We scan through the bitmap and select the 3 biggest contiguous clusters of 1s.
Preliminary tests indicated that cubes usually have the widest signature, followed by the cylinders, and then the pyramids. Therefore, we report the biggest cluster as a cube, the next one as a cylinder, and the last one as a pyramid. The position is easily generated using the angle pointing to the middle of the cluster, the distance at this angle (from the scan performed at the start of the game). These results are then reported to the server before any further action.
Once the data sent, the robot performs a uses the scan results one last time to decide if there are objects on its right and/or left side. If no objects are detected, the robot takes a predefined trajectory and kicks the ball(s) into the other adversary’s field. So the robot can either kick one ball, both of them, or none. 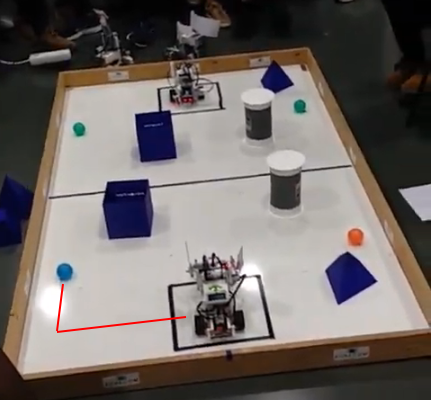 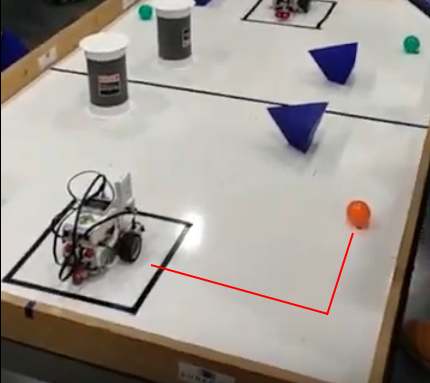 The robot scored decent results in the final game and lost only two matches (to the same team). Our results were greatly thanks to the simple yet efficient strategy that we adopted and that was very fit to the game. The robot performed very well when it comes to shooting the balls, and was actually the only robot that succeeded in shooting the balls.
Our performance suffered mostly by the lack of decent object identification. This is mainly due to our simple approach to this, where we failed to distinguish the different configurations of pyramids, and even failed to distinguish pyramids from a cube. Our results were average on the identifying the position.

This project was very fun to work on, and provided a good opportunity to play around with the features of our Debian Linux operating system. The sonar was a tight bottleneck that limited our performance, but we managed to work around it. 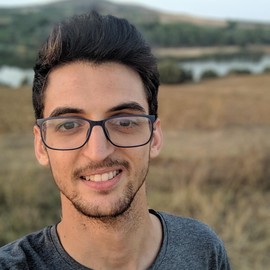 Master of Science in Engineering Student

A self-motivated graduate student in Engineering at IMT Atlantique. 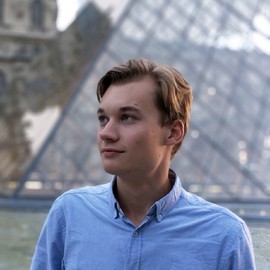 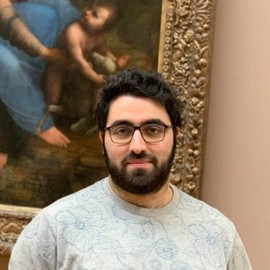